The fact that repealing the 8th amendment is taking soooooo long is not surprising. As history has proven Ireland has always been a right little prick to women. Here’s a timeline of all the scarlet Ireland has made women endure. I’d set your mind to RAAAAAAGE, right about now.

17th&18th century: The Magdalene Laundries opened. Where in fact, not a lot of laundry was done. They specialized more in torture, abuse and murder.

1916: My grandmother was born, she was diagnosed with scarlet fever almost immediately by doctors on account of her having ovaries.

1918: Women are given a half arsed right to vote to keep us quiet, but you basically had to be 30 and rich to use it. On we marched in our scarlet haze.

1922: The year Irish women got the full right to vote after years of fighting for it. YAS KWEENS!

1930s: NO KWEEEENS! under Eamon De Prick’s leadership it’s made illegal for women to work in public service roles after marriage or to serve on a  jury. Coincidentally, this is the same year that Steven Avery was wrongly convicted of murder. (*Editor’s note* “No, it wasn’t. that’s a completely different year and totally unrelated.” *Me* “IS IT THOUGH?”)

1957: My mother was born. She would have had more rights if she had been born in 1922. She, along with 50% of the population are diagnosed with scarlet fever. The only known cure is being born a male.

1970s: Contraception was illegal and women were not allowed to get a restraining order against a violent partner. Chris Brown is born the same year. (*Editor’s note* “NO HE FUCKING WASN’T!” *Me* “I will not apologize for having this bottle of wine.”)

1983: Sheila Hodges is denied treatment for cancer that developed during pregnancy, in case it would harm the baby. Mother and baby both died.

1986: I enter this world, strolling out of the womb with a mad swagger that had other babies bitching in their cots. I’m diagnosed shortly after birth with a bout of scarlet fever caused by having…you know where I’m going with this.

1990: Marital rape is finally made illegal. IN NINETEEN NINTY. you know what else happened in 1990? The fucking SIMPSONS. That’s how recent it was.

1992: A referendum is held after a young girl who had been raped demanded an abortion, the outcome is basically you’re allowed to get an abortion but only if you’re about to kill yourself. Grim. Linda Martin did us a solid though and won the Eurovision.

1993: A mass grave containing 155 corpses from the Magdalene Laundries is found in Dublin. The last Magdelene asylum did not close until 3 years later in 1996. You know what else was happening in 1996? My little brother was born. He was given the all clear from scarlet fever on account of him being a male.

2010: Michelle Harte, a woman who has  terminal cancer and is pregnant is denied an abortion, even though doctors advised it was posing a substantial risk to her health. Michelle is forced to go to England to have the procedure she was denied in Ireland, she dies the following year.

2012: Savita Halappanavar, a 31 year old dentist arrived in Galway hospital with back pain and was found to be miscarrying , she pleaded for a termination of the pregnancy for a number of days and was denied, being told by staff that “this is a catholic country”. Savita died of septicemia a week later in Galway hospital. Meanwhile, I move to Canada where abortion has been legal in all cases since 1969 and everyone pulls a full body redner on my behalf when they realize what’s going on in Ireland.

2014:  A young refugee who was raped prior to entering Ireland discovers she is pregnant and is denied and abortion. She is arrested while trying to travel to england for an abortion, she proceeds to go on hunger strike and at 6 months pregnant, the baby is delivered prematurely through c – section and put into care. My scarlet fever gets progressively worse. 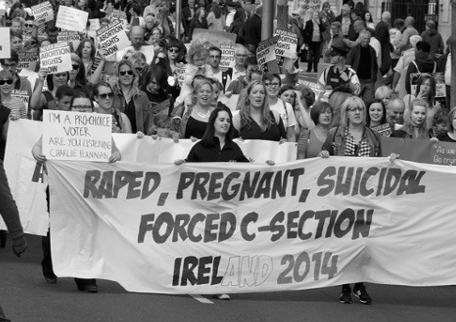 2015: A private members bill is put before the government to repeal the 8th amendment. It’s rejected.

2016: The UN comes out in public and states that they know our dirty little secret and they’re going to fucking tell everyone.

2016: A 21 year old Northern Ireland girl is given a suspended sentence, i.e a criminal fucking record, for having an abortion at home. I am diagnosed with terminal mort.

2016: Two women live tweeted their abortion journey to Enda Kenny, gaining 27,00 followers in one day and garnering huge international media coverage. Enda, of course ignores them, as he only exclusively tweets about sports.

2016: We spearheaded a movement to get the Irish abroad involved in the fight to repeal the 8th. 30 cities held global gatherings on 24.09.16 to stand in solidarity with the 25,000 marching for choice in Dublin.

2017: Will 2017 be the year that we as a country can finally repeal this SCARLET? The year that we finally take off the last shackle the catholic church has on us? The year where we give women back our rights, our choice, our bodies? The year Bryan McFadden finally gets a  job? (*Editor* “PUT DOWN THAT BOTTLE OF FUCKING WINE!” *Me* “I will NOT!“)

The government can put this off, paint over us, ignore us, but they will NEVER silence us. We will continue to move forward like we always have, fighting for our rights, for our equality and we WILL get there. Eventually.

Join us over at Repeal Gobal to keep up to date on the latest scarlet happenings in the fight to repeal the 8th.

7 thoughts on “Repeal The Scarlet – Repeal The 8th!”